Make it a Taco Tuesday!

Happy Tuesday--or in this case, Taco Tuesday! Tacos have become a pretty big staple in our house, probably because they are one of my husband's favorite foods (right up there with bacon and skittles), so as often we can, we like to make our Taco Tuesday tradition happen! This past week we took it up a notch.
I've always wanted to try making mango salsa, so with the little extra time on my hands ;), I went for it with a couple recipes I found on Pinterest!  I did two variations. One that included strawberries--yum!    Considering it was my first time cutting a mango and making salsa from scratch, I think they turned out pretty well! 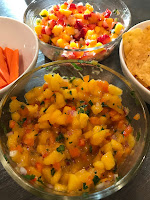 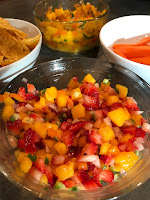 And when we added this salsa to the 'carne asada' (slab of meat) my hubby had marinated and the other fixings, it was a divine combination! Now, I did have to make a couple modifications of my own to stick with my elimination diet, like avoiding cheese, tomatoes and any kind of sour cream, but by turning it into a taco salad on spinach and adding some avocado slices .... it was mighty tasty. There was enough flavor in the flank steak alone to make my mouth water, and I'm not typically much a of a red meat eater!

Here's a few other updates from this past week on what this elimination method has been like: 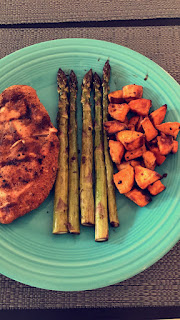 Focusing on the bright side of it all, I was able to resist some major temptation, make a couple new recipes and I remained active throughout the week which all resulted in me feeling good about my decisions and my progress.
These kinds of tests and temptations are going to happen in life on a regular, almost daily basis. Eating out with friends and family, going to sporting events, concerts, parties, etc., and being around people who are not eating the way you do. It's always going to be more challenging to make the healthier choice. I mean if you have a pizza and salad in front of you, isn't a piece of pizza always going to look/sound more appetizing than a salad? Yes. But I had to remind myself again why I'm doing this. If I want to FEEL my best I have to start with doing my best to eat right. And good things come to those who work their asses off and don't give up (not to those who wait, in this case)!

Now get out there and enjoy what's left of your Taco Tuesday ;)