It's been quite a while since my last blog post, and what first started out as guilt for not writing eventually turned into straight up avoiding it. What can I say? In part, I've been a little busy enjoying the heck out of summer in Michigan. But alas, I finally felt it was time to flip the switch back on and start writing, especially after reading an article that gave me the motivation to do so.  I decided it was time to push myself a little harder to get back to writing and I'll get to the reason why in a bit.

First, let's briefly cover the past couple months. Summer sped by as usual, and I continued my pledge of making a conscious effort to take advantage of having time off, and appreciating every day. I spent a lot of my time exploring different parts of Northern and Western Michigan with family and friends; places like Pentwater, Ludington, Grand Haven, my family's cottage in South Branch. And I've also found fun nearby, trying paddle boarding on Walled Lake and visiting Detroit's Eastern Market. We've also gotten the chance to take trips to the Pittsburgh area, where Jason has family, and I most recently made a trip to Chicago to see old friends and explore the city as if I were a tourist. It's been a blessing to have this time for myself, to travel, to visit with loved ones, to focus on being present in the moment and totally recharge my health.

So...last I left things, we had honored and celebrated the life of our Elle Jay on her anniversary of becoming an angel, and we experienced something extra special that night. After a nice dinner at home we said a few words about her,  released 17 balloons into the sky (1 for each week of my pregnancy) and sat on our front porch, listening to music and enjoying the moment, waiting for the sun to set. Less than a half hour later some dark clouds rolled in and it started to lightly rain, but in the distance there were patches of blue sky and I could see the sun peaking through. We got up from our seats to look up at the sky and sure enough, we saw a rainbow had formed over our house. It was a truly special moment for us. We both felt as if our angel Elle Jay was sending us a sign that she was okay and we'd be okay, too. Little did we know it may have even more meaning than that...

During this time I had been in the middle of my 'official' 28 day detox as part of the holistic program I was apart of. I was eating cleaner than ever and feeling amazing as a result. I had always figured eating clean and wholesome foods would have an impact on how my body looked and how much I weighed, but I didn't realize until I experienced it how much of an impact what you put in your body can have on the way you feel, both physically and mentally as well. All the symptoms that had been ailing me for years had faded away. I had lots of energy, my heartburn and indigestion had almost  completely vanished and in combination with all the exercise I'd been doing, I felt stronger and better than ever! I was feeling great about myself and the choices I made to get me to that point.

Meanwhile...
That month ended up being significant in many ways. Three weeks in to the detox, and a few days after celebrating Elle Jay's anniversary we were overjoyed to find out via an at-home test I was pregnant again! It was the most pleasant news we could have received or expected. Within two weeks though, everything I had been so focused on during the detox started to change. I started feeling a difference in my body while exercising, like I wasn't able to do as much as easily as I had before, and I started to get sick when thinking about eating all the foods I had relied so heavily on during the detox. So much for avoiding gluten and bread!! My diet flipped to bagels and crackers everyday!

Since confirming we were pregnant back in June,  there were many weeks I was feeling disconnected from my writing. If I had to guess why I'd say it could be that my mind felt scattered and all over the place. As many women know and can relate, the first trimester can often feel like a four to six week hangover (without the fun parts of drinking included), and between feeling much less than my ordinary self and trying to cope with all the emotions I was experiencing, it was a lot like living in a fog.
But here I am, marking 17 weeks in my pregnancy today and feeling better and thinking clearer than I have in several weeks (besides those moments of extreme hormonal mood swings ;) ).  17 weeks is also a significant marker for me for obvious reasons. I won't deny that our previous loss has been heavy on my mind the past few days and especially last night. I found myself waking up throughout the night, feeling some discomfort in my abdomen and worry of what could happen, praying for the best, and trying to hold onto something positive. Every day that I wake up feeling good I'm thankful and I'm sure that will continue every day I have ahead in this pregnancy. Whenever my thoughts start to wander down worrywart lane, I do my best to stop and change direction, focusing on the positive. And I often remind myself how lucky I am to be experiencing this miraculous process of growing a little person inside me. We have so much to be thankful for and we are so looking forward to holding this baby in our arms, come February! 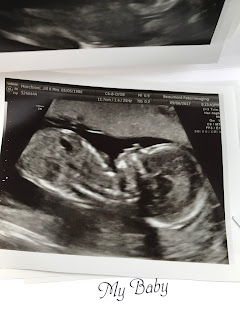